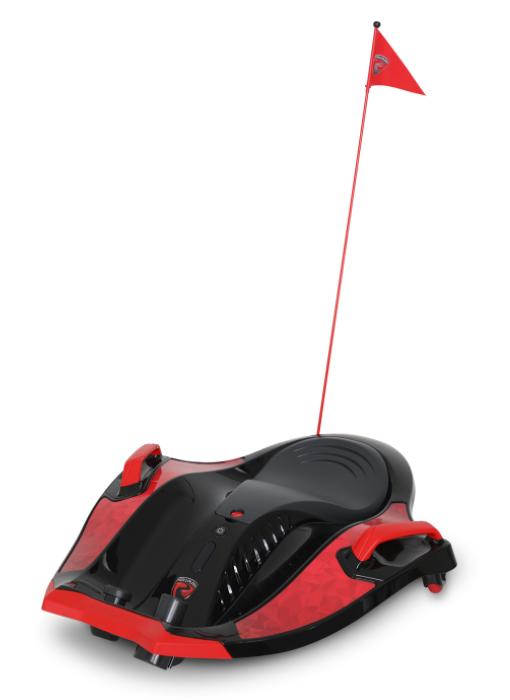 When your children reach the age of six, they begin to take an interest in trying different physical activities. While not all kids aspire to become professional skateboarders or famous BMX riders, kiddie rides are a great way for parents to introduce their kids to a different and fun way to get around. That’s because ride-on toys allow children to improve their body motor skills in a fun and exciting way as they explore the ability to use their arms and legs to accelerate, break and maneuver the ride-on toys. So, if you’re looking for a new set of wheels for your kid(s) to ride around the block, consider getting the Rollplay Nighthawk.

The Rollplay Nighthawk is a 5-wheel, battery-operated children’s toy that has a built-in accelerator and brake pedals to control the speed, which can reach speeds of up to 6.5 mph, incorporating a set of side handles that can be used to maneuver in the direction of turning within a 2-meter radius by tilting left and right, and a long rear safety flag to signal its rider’s presence, all of which kids can get up to two hours of battery life.

Designed for kids 6 years and older, and featuring just simple, intuitive and super cool controls, this innovative kiddie ride is sure to be a hit with any thrill-seeking youngster in your family.

Now, let’s take a more detailed look at Rollplay Nighthawk and check out everything your kids can expect from this game.

Starting with its size, the Rollplay Nighthawk is big enough for kids to ride, measuring just 31.1 inches long, 25.2 inches wide, and 8.4 inches tall. However, this ride-on toy is still compact enough to be easily stored away in any corner of your garage when your child(ren) is done using it.

On top of that, the ride-on for kids is reasonably lightweight to carry around, weighing in at just 20.5 pounds, but still heavy enough to ensure kids always have plenty of stability while riding it.

Speaking of stability, know that this ride-on is designed specifically for use by children ages 6 and up, as it can support a maximum weight capacity of 110 lbs. (49.89 kg).

What’s more, the Rollplay Nighthawk comes fully assembled right out of its box, so parents don’t even have to worry about putting this ride-on together.

The Nighthawk also has a really cool and radical looking design. For example, you can get it with its main body that comes in flat black with bright red accents, but the company also has other great designs available for purchase that come in different eye-catching colors (which are included at the end of the article). For our Nighthawk review unit, note that we got the white color model, which features a neatly detailed white body with red, black, and white accents.

Not only that, but this ride-on for kids also has a very durable construction, as its functional parts as well as its outer shell are all made of high-quality plastic materials that are very durable.

Moving on to the various built-in components and controls that this ride-on for kids incorporates, along with its functions/capabilities.

For its fast movement, the Rollplay Nighthawk integrates a set of two medium-sized (x2) front wheels connected to each other by a sturdy axle made of metal, as well as a large rear wheel that works with the front wheels. for its forward movement.

In addition, the Nighthawk also comes with two (x2) miniature side wheels (one on each side end) that are strategically located directly below the side handlebars to provide the eventual child riding it with additional support and stability while attempting to maneuver this ride-on to the left or Right by grabbing its side handlebars and leaning towards either side.

Then, to control its speed and acceleration, Rollplay Nighthawk also integrates a built-in accelerator pedal and brake pedal (built into the front end of the unit) which ultimately provides the child riding this ride-on with complete control over the unit’s speed. As mentioned before, the Nighthawk is capable of reaching speeds of up to 6.5 miles per hour.

Also read :
A comprehensive guide to popular bonuses and promotions at online casinos

Also located in the center of the unit is a built-in on/off button that can be used to turn the device’s electric drive system on and off.

Near the back side of the unit, there is a sturdy seat constructed of rubber and hard plastic where the child driving the Nighthawk sits. The Nighthawk seat is well built, has a very sturdy construction, is very stable, and shows absolutely no issues about any loose parts.

As mentioned, the Nighthawk also integrates a set of side handles that can be used to maneuver into a turning direction within a 2-meter turning radius by leaning left and right, all while its side wheels further assist with both the unit’s turning and stability.

Last but not least, on the very rear of this ride-on, there is also a long built-in rear safety flag that is used to signal its rider’s presence, which means that even people driving around the block in longer cars will still be. Able to easily detect your child’s presence thanks to its long flag while enjoying the ride on the Rollplay Nighthawk.

To power the electric drive system, the kiddie ride uses a built-in rechargeable 12V/7Ah lithium-ion battery, which kids can get all together for up to 2 hours of battery life.

When the ride’s power runs low, all parents (or their kids) have to do is connect the device to power via its battery charger, which also comes in the package.

The Rollplay Nighthawk is a 5-wheel, battery-operated children’s toy that has a built-in accelerator and brake pedals to control the speed, which can reach speeds of up to 6.5 mph, incorporating a set of side handles that can be used to maneuver in the direction of turning within a 2-meter radius by tilting left and right, and a long rear safety flag to signal its rider’s presence, all of which kids can get up to two hours of battery life.

Quite simply, this ride on toy is a great and very safe way to introduce your kids to riding, as it is designed to safely deliver the excitement of driving on wheels with its superior stability, ultra-durable construction, and easy-to-use controls.

If you’re interested in buying it, know that each unit is currently discounted from its standard price of $189.99, and now goes for just $120 (it saves you $69.99). You can order it online now, either directly from Rollplay’s official shopping pageAlternatively, you can Get it from their Amazon pageif you prefer.

bestonlinecasinoontario.ca has just launched and is full of casino reviews

Table Of Content [ Close ]1. What is bestonlinecasinoontario.ca?1.1 What information can casino players living in Ontario expect from bestonlinecasinoontario.ca?1.2 conclusion It is safe to say that online casinos are now a big deal in Canada. However, as in the United States, legislation for Canadian online casino sites can vary slightly from Canadian province. Specifically […]
Tekno

Nowadays, most of the new released smartphone models tend to come in slightly bigger and bulkier sizes than their predecessors. This is mainly because better components such as higher definition displays or even lithium-ion batteries that have a higher battery capacity tend to be slightly larger than the previous components that are meant to be […]