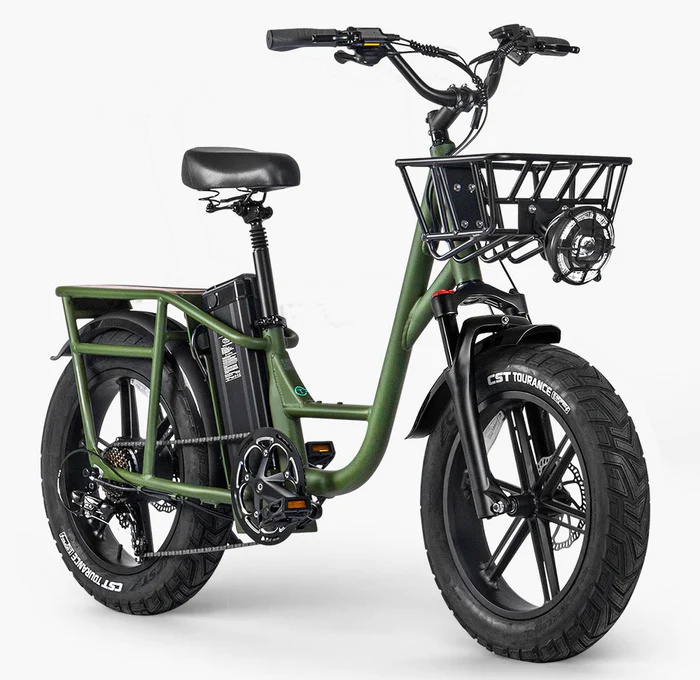 Nowadays, cycling is the most energy efficient mode of transportation for people living in urban environments, especially if they want to reduce their carbon footprint. According to recent statistics, the form of transportation chosen for moving around the city tends to be the largest part of most people’s carbon footprint, as Combined personal vehicle use and public transportation account for about a fifth of global carbon dioxide emissions. Compared to using cars and public transportation (It is the largest emitter of carbon emissions in the United States), adopting cycling as a personal mode of transportation can help you significantly reduce your daily carbon footprint. However, cycling on a regular bike still has its daily problems, like getting to work sweaty and having to expend your energy to get there. Unlike regular bicycles, electric bicycles offer urban commuters extended range and ease of use, as they are powered by built-in rechargeable batteries that make them capable of moving at reasonably high speeds of 15 to 28 mph (25 to 45 km/h). h), which is much faster than the average speed at which most people can cruise. As such, with an electric bike, you can get to any destination within your city quickly and without breaking a sweat, all in an emission-free manner. So, if you’re looking for a new electric bike to call your own, the Fiido T1 Pro is a great choice.

The Fiido T1 Pro is a high-quality electric cargo bike that features extra-wide rims and is equipped with a set of large and extremely durable 20-inch all-terrain tires that make it capable of riding just about anywhere. terrain, a front suspension fork that eliminates bumps and also increases rider control in particularly rough terrain, a bright headlight to indicate its presence, a built-in LED display, and a powerful 750W motor that makes it capable of reaching up to a top speed of 27.96mph / 45 km / h, and a high capacity 48V 20Ah lithium-ion battery makes it capable of traveling up to 93.20 miles / 150 km.

Designed for everyday city use, this high-end electric bike can easily take you around town between home, work, your favorite coffee spot, and any other points of interest within your city.

Now, let’s take a more detailed look at the Fiido T1 Pro and check out everything this electric bike can do for you and your family.

In terms of its design, this electric assist bike has a very simple and modern design, which gives it a very cool and discreet look when you ride it around town.

Moreover, it also has a premium and highly durable build, as its entire body is built from high-quality aluminum alloy.

Both the handlebars and pedals of the bike are also made of aluminum alloy, which makes them as durable as the rest of the bike’s frame. In addition, its handlebars are also integrated with a set of rubberized grips in order to ensure that riders of different backgrounds can all comfortably grasp the handlebars of the bike, even if they are riding for long periods of time.

Moving on to the main components of the bike. For its mobility, this high-quality electric bike integrates a set of ultra-wide rims that come equipped with a set of large and highly durable 20-inch all-terrain tires, ultimately making it capable of riding on almost any terrain.

Not only that, but its ultra-rigid aluminum alloy frame also comes with a front suspension fork that not only eliminates any potential bumps the bike’s front wheel might encounter, but also helps increase the rider’s control while riding the bike. bike, and this is especially true for the times you are riding in rough terrain, ultimately ensuring a safer and smoother ride at all times. 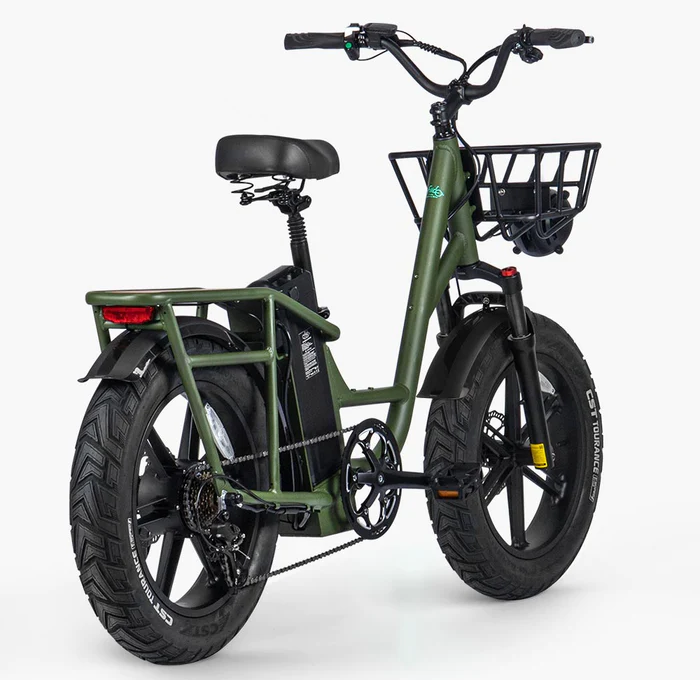 Then, as for its drivetrain, the Fiido T1 Pro comes with an advanced rear-wheel drive system, which consists of a Shimano 7 Speed ​​Gear, a Steel 52 Tooth Chainset combined with a KMC Z7 chain, and high-quality hydraulic brakes. 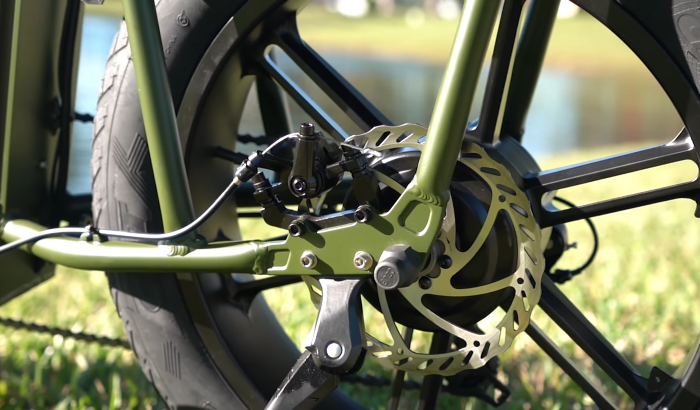 All of the bike’s mechanical components from its rear-wheel drive system are supported by the 3 Gear Power Boost electric drive assist system.

On top of all of the aforementioned, the Fiido T1 Pro also comes with a headlight used to indicate its presence that features two different levels of brightness, which comes built into the front basket of the bike.

Now, when it comes to assembling this electric bike, know that the assembly process is pretty straightforward, as only some of its secondary parts have to be bolted/mounted to the main frame of the bike, and this mainly includes the bike’s pedals, fender, front basket, and headlight.

It’s also worth noting that the bike package also comes with all the tools needed to put it together, which includes: one hex wrench, one open-end wrench, one #15 wrench, one #10 wrench, and a Y-Type Allen wrench, as well as a paper instruction manual Detailed and easy to read makes the entire bike assembly process fairly easy to follow, even if you’re someone unfamiliar with putting together an electric bike.

Embedded below, you can find the company’s official video guide on how to assemble the Fiido T1 Pro Utility Cargo electric bike:

For rear-wheel drive operation, this electric bike comes with a powerful 750W brushless gear motor, which eventually makes it capable of reaching a top speed of 27.96mph/45km/h.

The motor of the bike draws its electric power from a high capacity 48V 20Ah lithium-ion battery, which can provide you around 960Wh of battery capacity, which basically makes this electric bike able to travel a maximum distance of up to 93.20 miles/150 km. For comparison, note that the Fiido T1 Pro’s 48V 20AH battery is about 50% larger than the average 14 AH batteries that come with many other brands’ e-bikes on the market.

The bike’s 750-watt motor and battery module can be found safely tucked away directly behind the bike’s center frame column and under the riding seat, which means that both components are strategically placed to protect well when it comes to the overall build of the bike.

Whenever you need to recharge the bike’s battery unit, all you have to do is connect its battery to its dedicated charger (included in the package), which is guaranteed to come with a country-specific plug to ensure that you’ll be able to recharge its battery.

Finally, we’ll look at the bike’s built-in controls. Just like any other high-end electric bike, the Fiido T1 Pro comes with a set of built-in manual controls on both sides of the handlebars, which can be used to control the bike’s speed (on the right side), as well as control the brightness level of the bike’s headlight (on the left side). for the head).

In addition, the left handlebar of the bike also comes with a built-in LED display on which the rider can easily see various stats, which mainly include the current speed of the bike, along with the remaining battery power.

The Fiido T1 Pro is a high-quality electric cargo bike that features extra-wide rims and is equipped with a set of large and extremely durable 20-inch all-terrain tires that make it capable of riding just about anywhere. terrain, a front suspension fork that eliminates bumps and also increases rider control in particularly rough terrain, a bright headlight to indicate its presence, a built-in LED display, and a powerful 750W motor that makes it capable of reaching up to a top speed of 27.96mph / 45 km / h, and a high capacity 48V 20Ah lithium-ion battery makes it capable of traveling up to 93.20 miles / 150 km.

Also read :
How to use your phone safely

Overall, this high-quality electric cargo bike is ideal for anyone looking for an eco-friendly commuting solution suitable for urban environments. Not only is the bike comfortable and easy to ride, but with it, you can easily complete any road commuting within a big city.

If you’re interested in buying it, know that the standard version of the Fiido T1 is $1,599, while the Fiido T1 Pro is $1,699 (the main difference between both models is that while the standard model comes with disc brakes, the Pro model comes with hydraulic brakes ), and every purchase also comes with a one-year warranty (only for the bike frame). You can order it online right now from Fiido’s official shopping page.

Eating healthy isn’t always easy. This is mainly because one of the most important parts of the process requires people to keep track of their daily nutrition and daily calorie intake so that they can accurately calculate the amount of calories needed each day so that they can maintain, lose or gain weight. Now, while […]
Tekno

When trading Contracts for Difference (CFDs), choosing a provider that offers the right mix of features and services is essential. With so many CFD providers available, how can you be sure to choose the one that best suits your needs and investment goals? Here, we’ll look at seven key factors to consider when choosing, from […]