Keeping your home floors, carpets, and stairs clean doesn’t have to be a difficult task. While cleaning other areas such as above and below work surfaces, as well as cleaning shelves and furniture, all of these require you to save some extra time during the week as they have to be done manually and more thoroughly, nowadays you do not have to spend your time and power clean your floors, as you can simply resort to a smart robotic vacuum cleaner for the job. That’s because smart robot vacuums are so effective at cleaning up dust and getting rid of allergens, as they are equipped with fairly powerful suction motors and filters that make them capable of pulling up any dust, dirt, or debris in their path. With that said, if you’re looking for a new smart vacuum cleaner for your home, consider the Ecozy RV-SG250B Robotic Vacuum Cleaner/Mop.

The Ecozy RV-SG250B is a smart 2-in-1 robotic vacuum and mop that features a self-emptying function and a self-charging function for its dedicated station, equipped with a 1.5-liter dust bag and an upgrade bag. A 5-layer HEPA filtration system that can hold all collected dust and debris for up to 45 days, while also featuring up to 3,000Pa of suction power, intelligent dynamic motion navigation technology, and in-app controls including cleaning scheduling and real-time mapping Via the EcozyHome app, Voice Assistant support for both Google Assistant and Amazon Alexa, and up to 150 minutes of battery life.

With all its innovative functions, this smart robot vacuum and mop can conveniently take care of all your standard household cleaning tasks, allowing you to keep your home perfectly clean on a regular basis.

Now, let’s take a more detailed look at the Ecozy RV-SG250B and check out everything the smart robot vacuum and mop has to offer you.

Starting with the dimensions of the Ecozy RV-SG250B, note that this smart robot vacuum and mop comes in a fairly compact size, measuring just 2.97 inches in height, which means that this model is noticeably thinner than many other brands of robotic vacuums on the market, making it Fully capable of cleaning dirt and debris, not only around your home, but especially under tight spaces such as furniture such as tall worktops, sofa, bed, etc.

The Ecozy RV-SG250B also features a very slim, modern and minimalist design, featuring a simple matte black body coated with a glossy finish for a modern yet still discrete look. This simple, modern design is also seen in the battery charging station and duster for the robot’s self-emptying.

Then, when it comes to their construction, both the robot vacuum as well as the station for which it is intended also feature a very sturdy build, as the outer casing of both units is made of very durable plastics.

Now, we turn to the different components of the Ecozy RV-SG250B. For its automatic movement, this smart robot vacuum comes with a universal wheel (in the front) that works with a set of ultra-durable side wheels that are integrated in the middle of the robot’s underside.

The RV-SG250B three-wheel combo provides the robot with advanced power-boosting technology that not only makes it able to move over hard wood floors, as well as tiled floors and even carpets, but more importantly makes it capable of moving. It is easy to climb/cross over any obstacles in its path up to 0.59″ (15mm) high that have a slope/slope, including obstacles such as door sills, rails, and carpet edges. 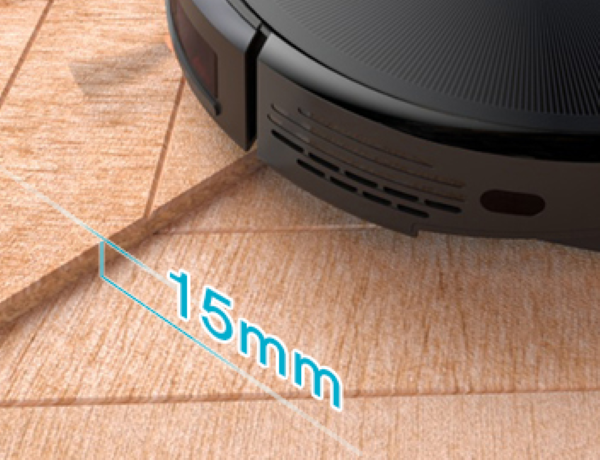 Integrated along the outer edges of the Ecozy RV-SG250B body, the robot also comes with a set of built-in anti-collision sensors that allow it to detect large obstacles in its path making it able to avoid hitting those themselves as well as a set of built-in anti-fall sensors that make it able to detect Any ground edges in order to eventually prevent the robot from falling down any flight of stairs.

Moreover, the robot also comes with a set of side brushes that rotate horizontally to effectively sweep any type of debris towards the center of the vacuum cleaner, which is used to pick up any dust, dirt, debris, loose hair, etc. from both. aspects of the robot’s trajectory.

All collected dust and debris is then sucked into the helical brush roller (the robot’s main brush) which is embedded in the middle of the robot’s underside (between its side wheels) and then vacuumed into any mess/garbage.

Now, as said before, the Ecozy RV-SG250B is designed to work as a 2-in-1 smart robot vacuum and mop, which means the device is not only capable of vacuuming, but also mopping the floors of your home. As such, the robot also comes with a detachable (washable) mop pad holder located on the back of the robot’s underside that securely holds the mop pad that is used when the machine is configured specifically for mopping floors (this is via the app).

The sweeping and mopping functions of the Ecozy RV-SG250B are driven by a built-in brushless motor, which can be configured so that the robot operates with a suction power of 700Pa, 1200Pa, 1500Pa or a maximum of 3000Pa Suction Power, for which the robot has a fairly quiet noise level, operates at only 60 dB. 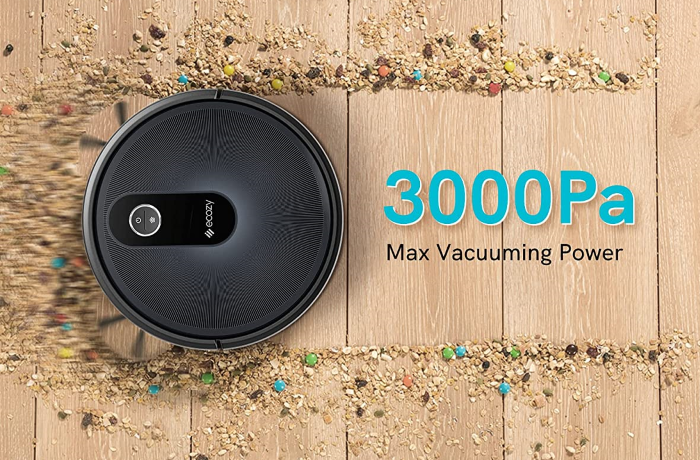 For the vacuuming function, the RV-SG250B comes with a 220ml dust bin, the robot also features a self-emptying function that basically allows the robot to detect when the built-in dust bin is almost full, which then triggers the robot. to automatically go to its designated station and empty the dustbin there. 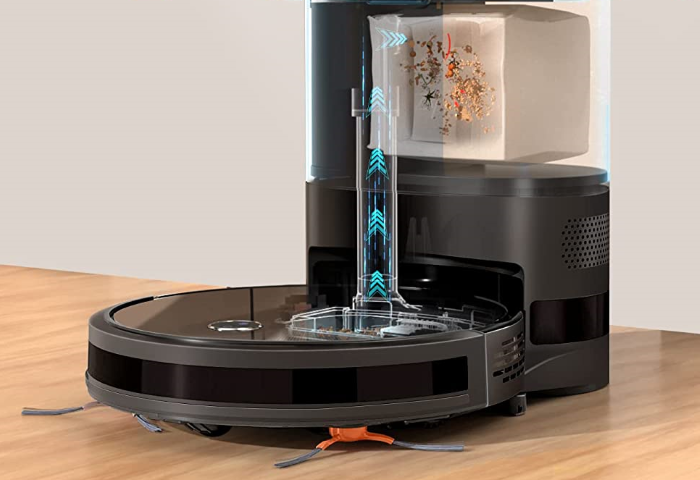 The station for the robot is equipped with an advanced 5-layer HEPA filtration system and a large-capacity 1.5-liter dust bag that can hold all collected dust and debris for up to 45 days, which means you won’t have to worry about emptying either. Robot dust box or its station dust bag for a long period of time. 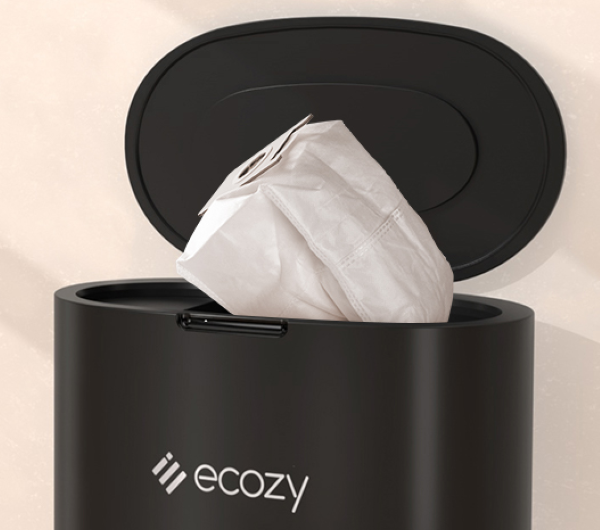 Then, for mopping functions, the RV-SG250B also comes with a detachable 180ml water tank, which is easy to empty and refill.

Last but not least, due to its movement throughout the fully automated cleaning process, this smart robot vacuum and mop uses smart dynamic navigation technology, which essentially gives it smart trackability that ensures more thorough and effective cleaning in a time-saving way. 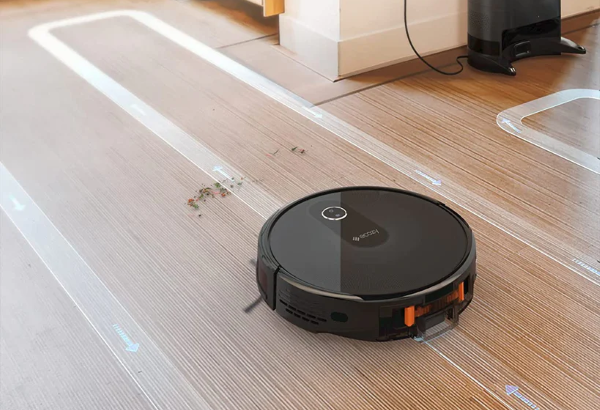 To establish a wireless connection with its Smartphone app, the Ecozy RV-SG250B uses a Wi-Fi connection.

Now, as powerful as it is, this smart robot vacuum comes with a built-in lithium-ion battery that can give you up to 150 minutes of battery life. 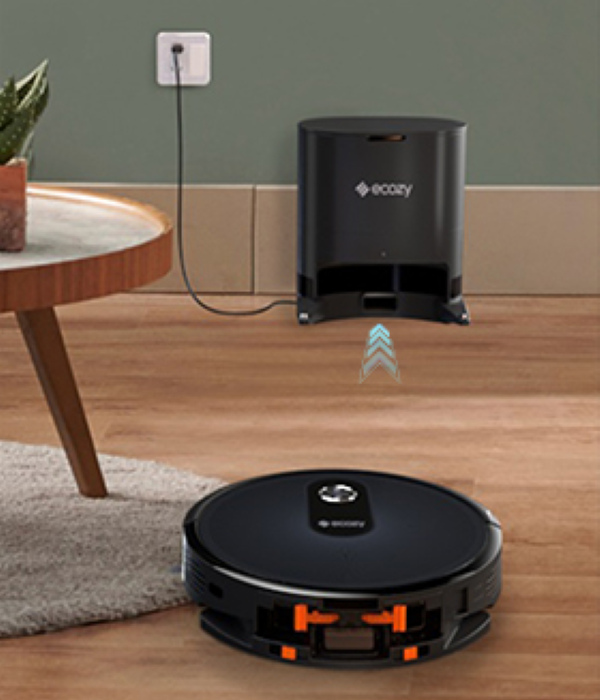 As mentioned earlier, the RV-SG250B also features a self-charging function that makes it able to automatically detect when its battery is running low, in which case the robot automatically returns to its designated station to recharge its battery.

Finally, to control all of the robot’s smart functions, you can simply use the Smartphone Companion app dedicated to the RV-SG250B, called the EcozyHome app, and it’s available as a free download for both. iOS And the android hardware.

Additionally, users can also fully program the robot’s scheduling for both vacuuming and mopping functions, including configuring which areas should be cleaned first (meaning in a specific order) within the robot’s layout already assigned to your home.

Finally, users can also set up restricted areas to prevent the robot from accessing certain rooms as well as to prevent it from crashing into fragile décor using magnetic strips that can be attached to the floor.

Also read :
10 reasons why TikTok video marketing is essential for you! 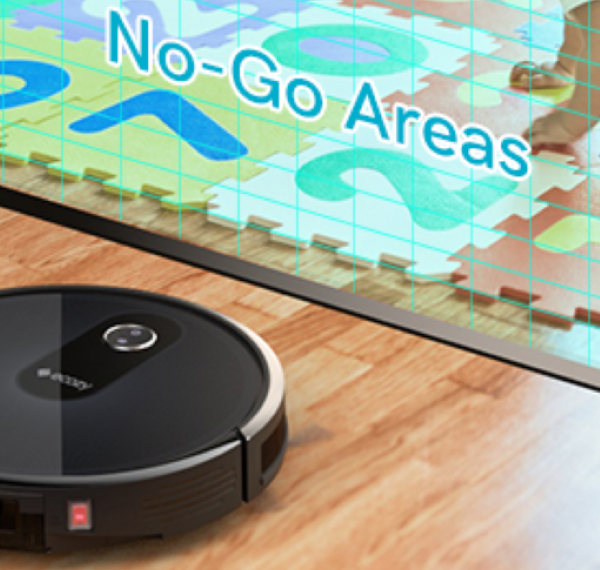 Best of all, this smart robot vacuum also features Voice Assistant support for both Google Assistant as well as for Amazon Alexa, which means you can also control most of the robot’s different functions via simple voice commands.

Inside their package, users will find: Ecozy RV-SG250B robotic vacuum/mop (pre-equipped with 220ml), washable robot mopping pad holder, total (x4) side brushes (2 sets of 2), dedicated robot dusting and charging station (pre-equipped with bag) 1.5 liter dust), a HEPA filter for his station, plus three additional (x3) 1.5 liter dust bags, plus a remote control and two (x2) 3A batteries, 3M adhesive pads, a total of 2 meters of magnetic tape (easy to cut into shorter sections), as well as the user manual for the robot.

The Ecozy RV-SG250B is a smart 2-in-1 robotic vacuum and mop that features a self-emptying function and a self-charging function for its dedicated station, equipped with a 1.5-liter dust bag and an advanced 5-layer HEPA filtration system that can hold all collected dust and debris for up to 45 days, while Also features up to 3,000Pa of suction power, Smart Dynamic Navigation technology for its motion, In-app controls including cleaning scheduling and real-time mapping via the EcozyHome app, Voice Assistant support for both Google Assistant and Amazon Alexa, and up to 150 minutes of battery life.

Also read :
Reasons why you should take bone broth protein

All in all, this is a really smart vacuum model to match, featuring all the functionality you would want in a smart robot vacuum and mop. With the Ecozy RV-SG250B, you can not only easily configure different cleaning schedules and control the robot via its app or via voice commands, but you won’t have to worry about disposing of collected dust and debris thanks to the same-vacuum function and its dust and charging station, which can Keep all of that collected waste for up to a month and a half.

If you are interested in purchasing it, know that the price per unit is $399.99. You can order it online right now from Amazon eCozy page.

Everything you need to know about the 10GBASE-SR optical module

A comprehensive guide to popular bonuses and promotions at online casinos

Table Of Content [ Close ]0.1 final thoughts If you are a fan of online casino games, you will know that technology has paved the way for some great new and classic games. Better than this, it is Live casino. Here, you’ll find the latest cameras and software broadcasting live for real-life agents as they […]