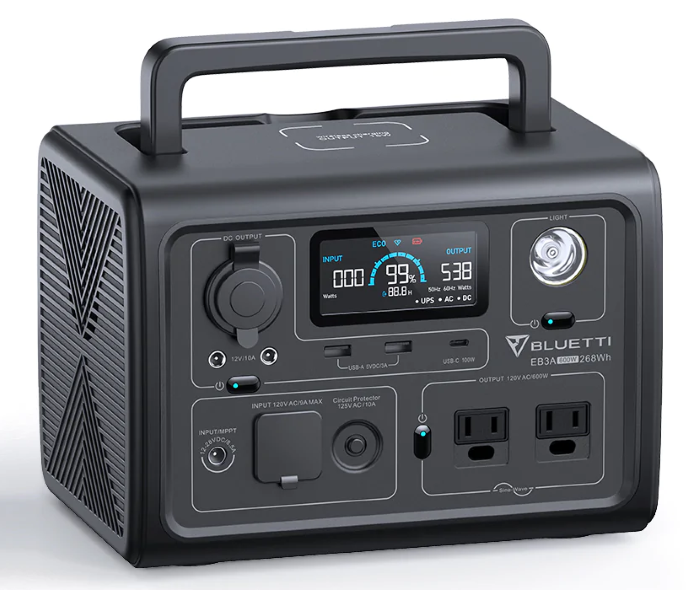 Designed to be more energy efficient than conventional generators, they are not only highly portable, but also powerful enough to be used in almost any situation, whether that includes use at home, road trips, or even camping trips.

Now, let’s take a more detailed look at the BLUETTI EB3A and see all that this portable power station has to offer you.

In addition to its ultra-compact dimensions, this portable power station also comes with an integrated carrying handle that makes it very easy for users to carry the device.

In terms of its design, the BLUETTI EB3A has a very minimalist design as its body comes in a gorgeous matte black colour. 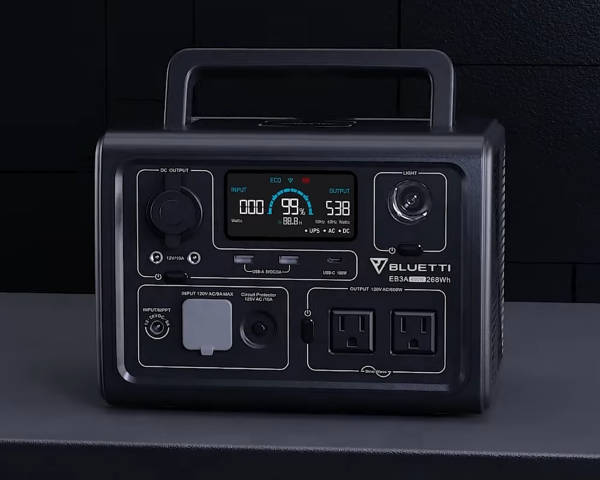 Not only that, but the entire unit also has a very durable build, as its outer casing is made of high quality TPU plastic. 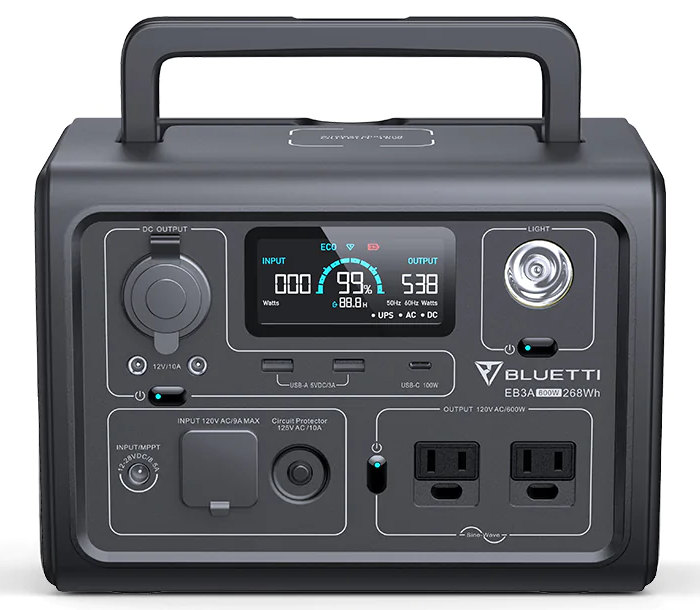 Last but not least, this portable power station is also rated with multiple safety certifications, including UL standard certification, as well as CEC, DOE, FCC and CA Prop 65 certifications.

Moving on to the BLUETTI EB3A interface, i.e. its dial panel (located on the front side of the device), which has a very simple and intuitive user interface.

Built into the top right of the device, there is also a built-in LED light that helps illuminate the perimeter of the device at night. 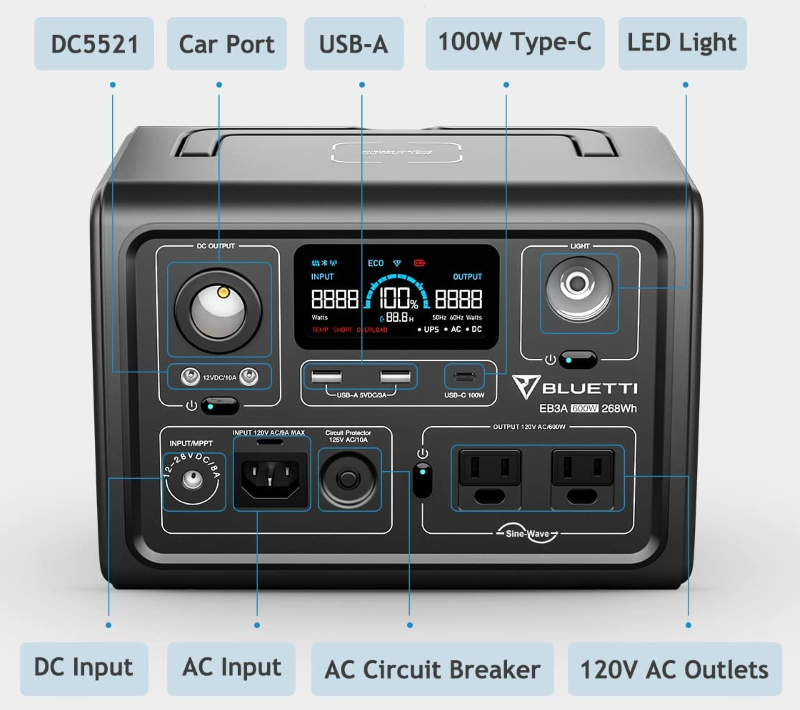 Next, at the bottom left of the device’s communication panel, we have the AC and DC input section, which integrates a 12-28V~8.5A solar charging DC input port (which supports up to 200W of solar input) which also doubles as a 12/24V car charging DC input port (by plugging the device into a car’s cigarette lighter power outlet), along with a 268W AC input port with support for 350W turbo charging, as well as an AC circuit breaker that acts as a switch Device overload protection.

Moving to the bottom right of the device connection panel, we have the AC output section, which essentially integrates two (x2) 120V/5A AC output ports that can provide 600W of output power in total, while providing support for up to 1200W of power Rush.

Finally, built into the top side of the device, there’s also a 15W wireless charging pad that can be used to recharge the battery of Qi-enabled devices. 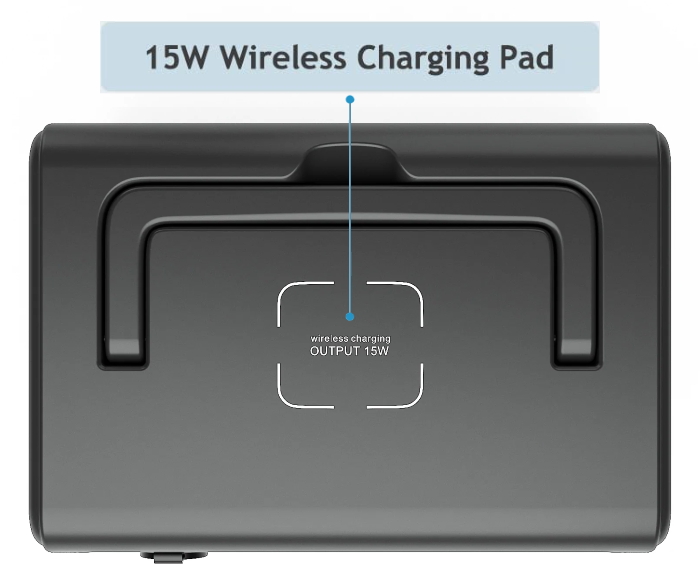 As mentioned earlier, this portable power station also features a Bluetooth connection, which is used as a connection method to establish a wireless connection with the Smartphone Companion application (discussed in more detail later).

Regarding the power supply of the device, as mentioned earlier, the BLUETTI EB3A is powered by a LiFePO4 battery pack that has a total battery capacity of 268.8Wh (12Ah), which works on the basis of modern battery management. system technology. 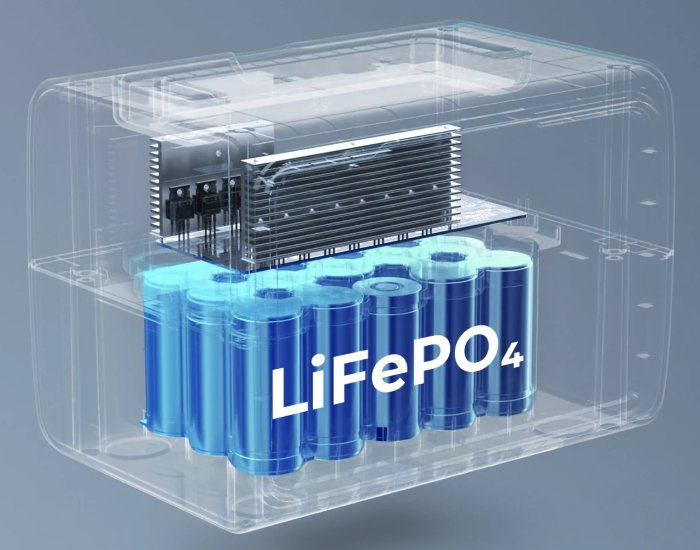 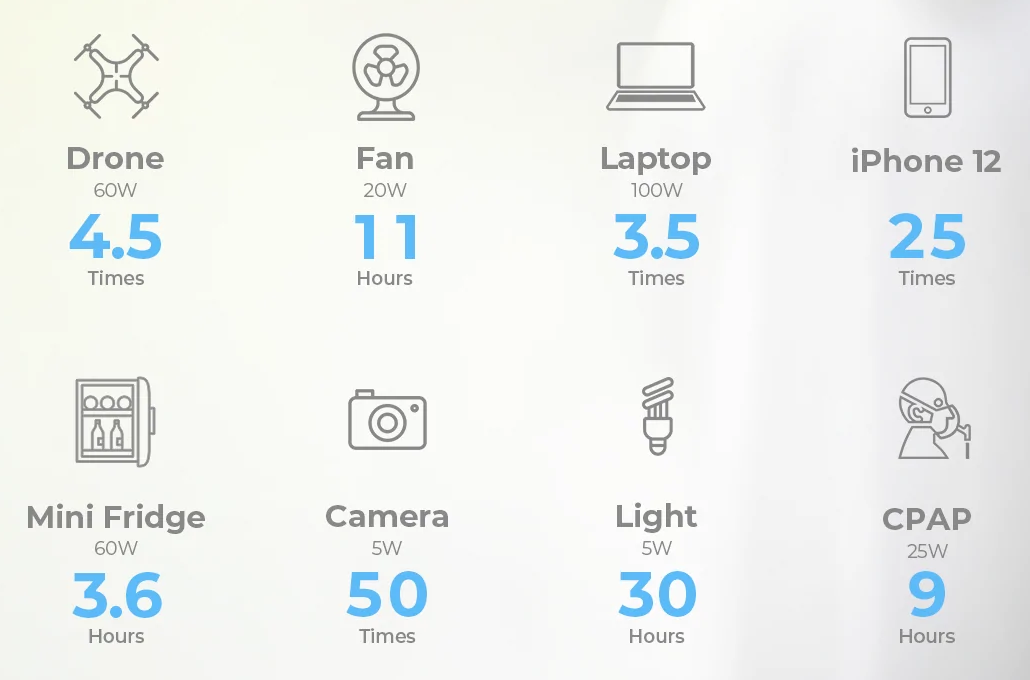 It is also important to note that the BLUETTI EB3A’s 268.8Wh LiFePO4 battery system is rated to have approximately 2,500 cycle life to 80% of the original battery capacity, which means that its internal battery makes this portable power station able to last about 6 Up to 8 times longer than portable power stations powered by conventional lithium-ion batteries. 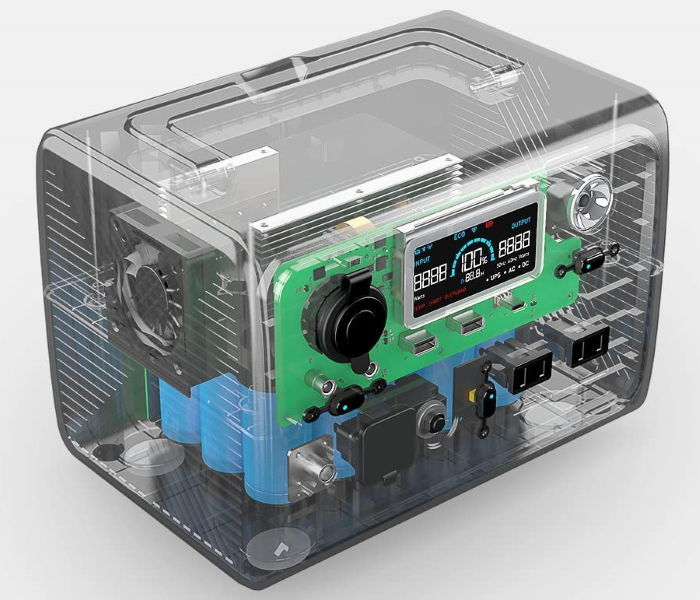 On a side note, in order to ensure the device’s built-in LiFePO4 battery system has the best possible storage life, it is recommended that users recharge the unit to 80% of battery capacity every 3 to 6 months, so keep that in mind.

Finally, when it comes to recharging the internal battery system, note that this portable power station supports a total of 6 different recharging methods.

The first and second methods are quite similar, as they consist of recharging the unit’s battery system directly via the 268W AC input port (by plugging the included AC charging cable into either a wall outlet or generator) which will take about 1.5-2 hours, or approximately 1.3 A watch with 350W turbocharging mode enabled. 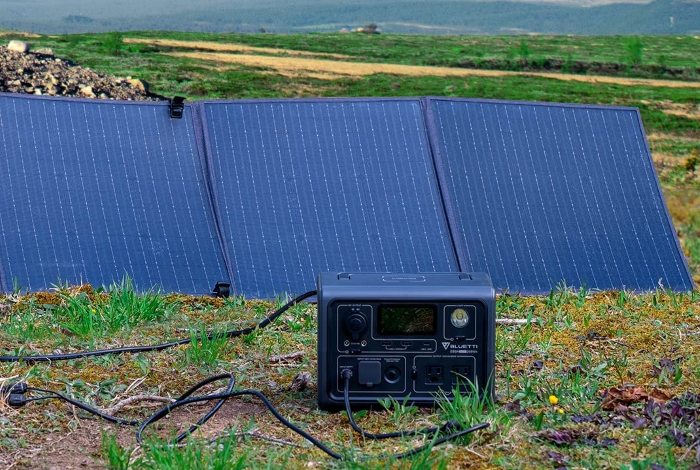 The fifth charging method consists of using the power station’s dual fast charging function to finally supply it with a total of 430W of input power through the use of a 268W AC input port combined with the 12-28V ~ 8.5A solar charging DC input port (meaning AC) + solar energy), which should only take about 1.2 hours of charging time. 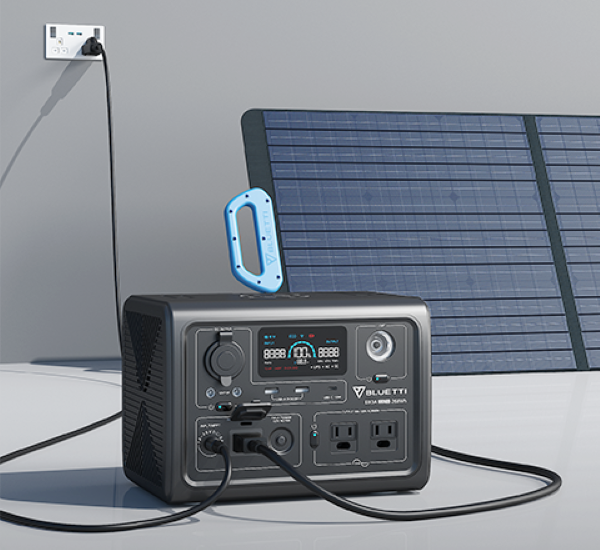 With all six power safety functions, this portable power station also features a UPS mode that allows users to use it as a dedicated UPS system for computers (or laptop).

Finally, users can also download the Smartphone Companion app for the BLUETTI EB3A, called the BLUETTI App (available to download for free) iOS And the Android devices), so you can have full control of the unit in a completely remote way.

Through the BLUETTI app, users are provided with remote monitoring as well as smart remote controls for all power input and output ports of the BLUETTI EB3A.

In general, this portable power station can be used to provide on-demand electrical power for any type of electrical appliance, be it a portable rice cooker, mini fridge, or anything else, in addition to all portable appliances. Devices, such as smartphone, tablet, laptop, etc.

Its compact size makes it ideal for outdoor use, whether you are planning to go on a road trip or even if you are looking to camp.

If you’re interested in buying it, the price per unit is currently $299. You can order it online now, either directly from THE OFFICIAL BLUETTI SHOPPING PAGEAlternatively, you can also Get it from amazonif you prefer.

World Cup with these TVs

Brain training (or mental training) can be an essential part of maintaining a healthy mental state, as doing so on a regular basis can greatly help improve cognitive functions such as memory recall, problem solving, focus and attention to detail. Basically, brain training activities work in a similar way but are ultimately better than aerobic […]
Tekno

Everyone talks about the fact that sleep is essential to maintaining your overall health and wellness, but few discuss the fact that sleep quality can affect work performance, regardless of whether you work in an office or remotely. Americans spend most of their days at work. Studies show that in addition to the average 9.5 […]
Tekno

10 reasons why you should automate your business processes

Table Of Content [ Close ]0.1 conclusion Automation has come a long way in recent years. Automation technologies are no longer the sole purview of large corporations, but are becoming increasingly affordable and available to businesses of all sizes. If you’re not already using automation to streamline your business processes, you’re missing out on a […]