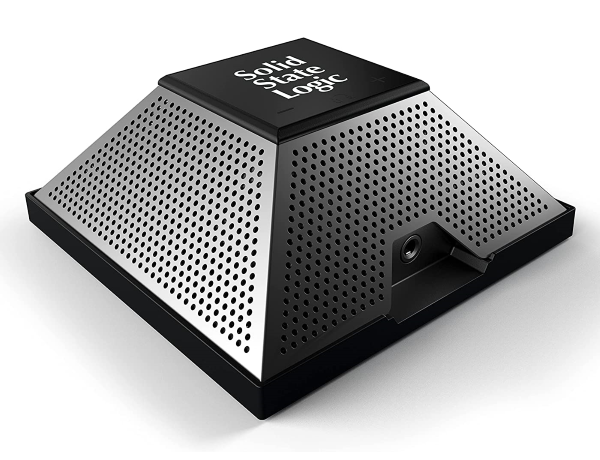 Whether you are into gaming, podcasting, podcasting, or even if you are just looking to engage in audio (and video) conferences over the Internet on a regular basis, one of the most important devices you will need to perform any of these activities will obviously be a decent microphone Because this is what will enable you to record your voice in high quality on your end. In any of these scenarios, the best microphone choice would be a USB microphone, as it was designed with convenience and budget in mind, and features a single USB cable connection that makes it extremely easy to connect said microphones to any computer setup and also to any recording software. In fact, compared to professional studio microphones (such as high-end XLR mics), USB mics offer a much simpler plug-and-play solution, because they require no external equipment or expertise to use. So, if you’re looking for a new microphone for your PC setup, consider Solid State Logic SSL CONNEX.

Designed specifically for conferencing, content creation, and recording, this advanced portable USB microphone can be used for almost any purpose, whether you are simply looking to ensure that your voice is recorded correctly during your online meetings, or even if you want to ensure that your audio is recorded correctly while creating content such as Live broadcast, record your music, or even play some podcasts.

Now, let’s take a more detailed look at Solid State Logic SSL CONNEX and check out everything this advanced USB microphone has to offer you.

Starting with the size of the microphone, the Solid State Logic SSL CONNEX comes in very small, which basically gives it a very small footprint that basically allows it to take up almost no space inside your desk.

In addition to its compact size, this USB microphone also has a fairly simple and professional-looking design.

What’s more, this USB microphone also comes with a 6.56ft (2m) USB-C to USB-C cable included in the package that makes it easy for users to set it up even away from PC/Laptop. Accommodation.

Furthermore, the SSL CONNEX also features a ¼ inch camera tripod thread at its base that can be set up with a microphone stand thread adapter (included in the package) that allows for more flexible mounting options.

Last but not least, this USB microphone also has a very durable build, as its outer shell is made entirely of high-quality aluminum alloy, with its base (i.e. the stand) as well as its top cover made of high-quality TPU plastic.

Navigate to microphone sound specifications and overall audio recording sound quality. Since this is a USB microphone, the SSL CONNEX comes with a high quality Quad Condenser Microphone Array, which should be even more specific and consist of a total of four (x4) separate acoustically designed condenser capsules, which work together to ensure great sound recording quality.

When it comes to microphone audio recording quality, know that SSL CONNEX is capable of recording audio audio at a typical resolution of either 44.1kHz, 48kHz, 88.2kHz, or a maximum of 96kHz at 16 bit bit depth.

Also read :
How to make Australian bonuses profitable in every online casino

Furthermore, note that this USB microphone also has an acoustic sensitivity of 10dB.

The microphone’s Solo mode (which acts as a unidirectional pickup pattern) is optimized for a single “spoken” sound source with voiceover coming directly from the front side of the microphone while reducing unwanted sound from the back and sides, meaning its Solo mode is intended for single user use Participates in an audio/video conference, whether it is while they are working from home, a corporate office, or even in crowded environments with a noisy background such as a coffee shop or an airport lounge, as well as for a single user doing a live broadcast.

The microphone array mode (which acts as an omnidirectional pickup pattern) is specifically designed for multiple “spoken” audio sources, such as group roundtable calls or live broadcasts with multiple users, for which a four-microphone condenser array and automatic Smart Mixer setup allows all existing users in room to be heard clearly while ensuring that all unwanted background noise is not picked up at the same time.

Finally, there’s also the microphone’s Music Mode (which acts as a stereo pickup pattern), a recording mode designed specifically for a group of musicians, that can detect and record higher signals commonly found in acoustic instruments, allowing a full range of singers and multiple musical instruments to all be captured. at same time. In this recording mode, SSL CONNEX’s advanced studio-quality processing intelligently varies the sound sensitivity of the quad condenser microphone array to reduce the noise level as well as any unwanted background noise, ultimately ensuring a great soundtrack every time Recording in multi-music recording mode users.

Finally, all four user preset modes for the microphone include an advanced immersive recording setting that allows users to access all four signals independently, ultimately making spatial recording a breeze.

Integrated into the top side of the microphone, there is a set of touch controls, mainly consisting of a Cough Switch in the middle that allows users to mute the microphone with a simple tap (it can also be configured to use as a push-to-talk button), along with touch buttons for volume down. and tap volume boost to quickly adjust the headphone level when a pair of headphones are connected to the microphone.

On the front side of the microphone body, we have a built-in 3.5mm headphone output port that allows users to connect a pair of headphones directly to the microphone.

Finally, on the back side of the microphone, we have the USB-C connection port.

Since this is a USB microphone, it obviously features a USB connection, more specifically, a USB-C connection.

Furthermore, SSL CONNEX also supports USB-A connectivity, as it also comes with a USB-C (female) to USB-A (male) adapter included in its package for those who only have USB-A ports available in their computer/setup laptop.

If you are interested in purchasing it, know that the price per unit is currently $149.99. You can order it online now, either directly from Solid State Logic’s official shopping pageAlternatively, you can Get it from Amazon If you prefer.

How to use your phone safely

April 3 is World Mobile Day because the first phone call was made on that date in 1973. The initial purpose of mobile phones was to improve communications traffic. Modern technology has far surpassed this function, ushering in a new era of connectivity. Historically speaking, there are very few examples of things people have become […]
Tekno

Table Of Content [ Close ]0.1 In conclusion Unified Communications as a Service has become the go-to solution for businesses looking to simplify their communication and collaboration needs. But with so many UCaaS providers now on the market, how do you know which one is right for your organization? Some companies may be tempted to […]
Tekno

Table Of Content [ Close ]1. The most well-known official licensing entities and regulators of online games1.1 America1.2 Europe1.3 Asia1.4 Australia/Ocea When it comes to playing at any online casino site, there is only one really reliable way for online casino players to trust and trust in the fairness of the casino games they are […]