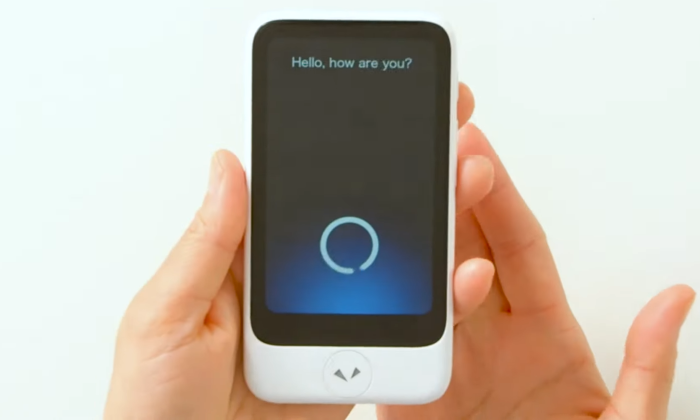 If you are someone who travels a lot, you probably know that it is not always easy to communicate with people from different countries or different nationalities, especially if they only speak one language. This is exactly when having a portable voice translator comes in handy. These intelligent AI translation devices are the perfect solution for translating voice and text from one language to another, not only for the times you travel abroad, but also for the times you meet someone local and want to. They communicate with them but do not share at least one common language with you. So, if you are looking for a new portable voice translator that is reliable and easy to use, then Pocketalk Plus Voice Translator is a great choice for you.

Pocketalk Plus is a next-generation portable universal translator equipped with a large color touch screen that features a one-button accurate translation function with support for 82 languages, an 8MP camera for converting text, typed words and tags, plus a digitizer function that calculates conversions for currency values, length, width, and temperature, plus Bluetooth 4.2 and Wi-Fi connectivity, a free 2-year cellular data plan that provides coverage in more than 130 countries/regions, and a built-in 1,550mAh battery that can provide up to 330 minutes of battery life.

Featuring an innovative and all-new next-generation design, this portable universal translator provides the most accurate translations, both for spoken conversations and for written text.

Now, without any further ado, let’s take a more detailed look at Pocketalk Plus and check out all that this next generation portable universal translator has to offer you.

Starting with the size of the device, the Pocketalk Plus comes in a fairly small size, at just 4.8 inches long, 2.6 inches wide and 0.45 inches thick, while also coming in very light, at just 4.4 ounces.

On top of its compact design, this portable universal translator has a minimalist design that gives it a very professional look. Moreover, the device also has a very durable build.

Moving on to the main components of the device. Starting with the screen of the device, as mentioned earlier, the Pocketalk Plus comes with a large color touch screen display, which has a screen resolution of 480 x 800 pixels.

Then, integrated into the top left of the rear side of the unit, we have an 8 MP camera for text-to-translation, which is used to translate any text, written words and signs present in the images captured by the viewfinder. In addition to a built-in LED flash under the camera lens.

Finally, due to the voice-based translation functions (be it via voice or via a text-to-translation camera), the device also comes with a powerful built-in 3W speaker, as well as a high-quality noise-cancelling microphone (used to record the user’s voice for speech-to-speech translation). ). 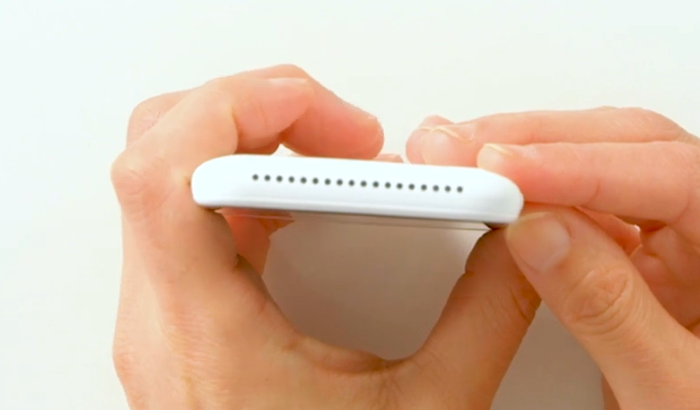 Built into the bottom, underside of the device, there’s a second, high-quality noise-canceling microphone, along with the device’s dedicated USB-C charging port, built slightly to the left. 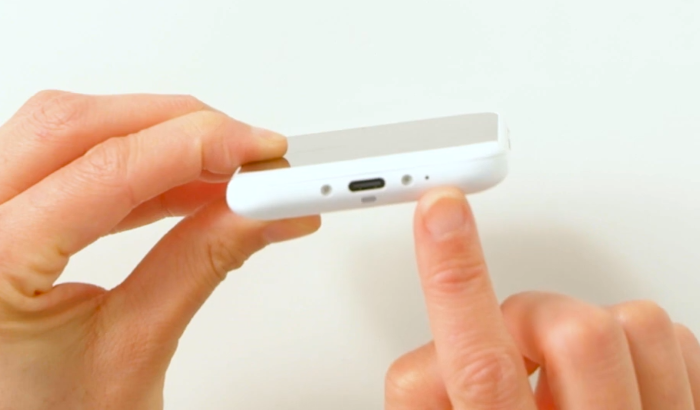 On a side note, we would also like to point out that Pocketalk Plus is also rated HIPAA compliant, making the device safe for use by health professionals without them or their patients having to worry about the presence of their personal data. has been hacked or hacked.

Finally, we also have the hardware specs. Simply put, this portable translator uses a 1.3GHz quad-core ARM Cortex 53 processor as the CPU chip, and features 8GB of storage and 1GB of RAM.

We’ll now talk a little bit about the interface of the device, including the built-in controls that make up its user interface, along with a few built-in communication ports.

Then, built right below the color touch screen, we also have the device’s dedicated translation button, which is used to operate the device to translate something (either audio or text from images).

On the right side of the device we have its manual control buttons, which mainly consist of a dedicated power button and volume up/down switch.

On the other side, meaning the left side of the device, there is a SIM card slot which is used for the slot in the nano-SIM card. Note, however, that the device will only come pre-equipped with a SIM out of its package specifically if you choose to subscribe to one of the company’s eSIM data plan models, so keep that in mind.

Last but not least, on the underside of the device we also have a USB-C charging port, as mentioned earlier.

One-button translation with support for 82 languages

After recording the voice or taking a picture, users can press the translation button of the device, which will enable the one-button translation function to accurately translate the recorded voice or image from its original language to your target language.

What’s even more awesome is that Pocketalk Plus features multilingual support for a total of 82 languages ​​(as of February 2022) for one-button translation functionality, so you can be sure that you can easily translate any voice or text into the target-language you need.

You can find all those 82 supported languages ​​listed below: 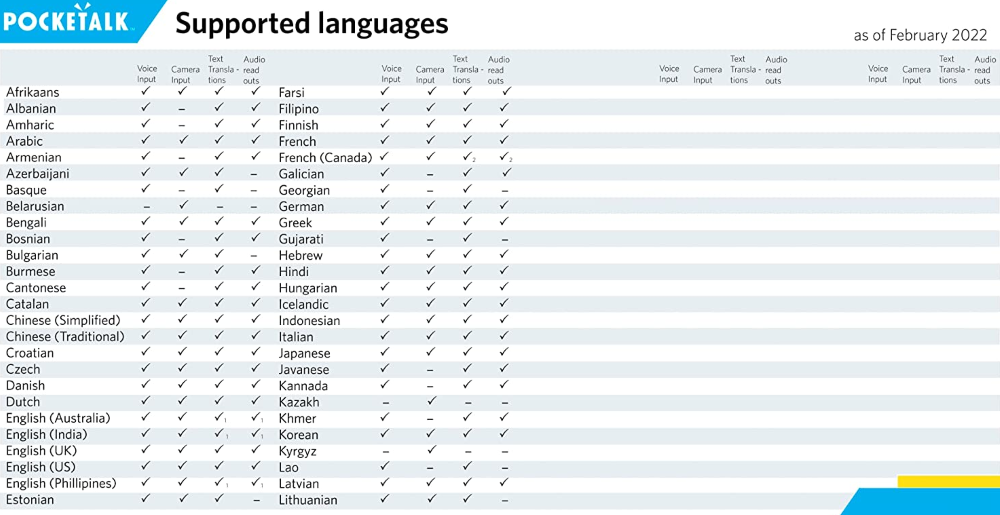 On top of voice translation capabilities, Pocketalk Plus also integrates a text-to-translation camera that ultimately makes this portable universal translator capable of accurately translating any text, written words and/or signs detected in images taken with it.

Thanks to that, you can also use Pocketalk Plus to translate documents, books, recipes, and any other text content.

The device also features Bluetooth 4.2 connectivity, as well as Wi-Fi connectivity, supports the most popular wireless standards (802.11a/b/n/g), and works in both 2.4GHz and 5GHz networks.

Finally, if you choose to subscribe to one of the company’s eSIM data plan models, the device will also come with a free 2-year cellular data plan that offers coverage in over 130 countries/regions (3G (W-CDMA) / 4G (FDD-LTE) / 4G (TD) -LTE)).

To be more specific, users are currently offered coverage for a total of 132 countries (as of September 2020), all of which are listed below:

As for its power supply, the Pocketalk Plus comes with a built-in 1550mAh rechargeable Li-ion battery which can ultimately provide users with up to 330 minutes of battery life/runtime (for continuous translation time), and around 192 hours of standby time when not in use.

Whenever you need to recharge a device’s battery, all you have to do is plug the included USB-C charging cable (included in the package) into its USB-C charging port and any USB-A charger, and there you go.

Inside their package, users will find: Pocketalk Plus Voice Translator, along with a dedicated USB-C charging cable for the device to USB-A, as well as a user manual.

Pocketalk Plus is a next-generation portable universal translator equipped with a large color touch screen that features a one-button accurate translation function with support for 82 languages, an 8MP text-to-translate camera that translates text, written words and signs, as well as a digitizer function that calculates conversions for currency values , latitude, longitude, and temperature, plus Bluetooth 4.2 and Wi-Fi connectivity, a free 2-year cellular data plan that provides coverage in more than 130 countries/regions, and a built-in 1,550mAh battery that can provide a battery life of up to 330 minutes.

By bringing Pocketalk Plus with you whenever you are traveling, you can easily ensure that you will be able to connect with people of almost any other nationality. With it, you can form deeper bonds (be it personal or work related), all without falling into any kind of language barrier.

If you’re interested in buying it, know that each unit is currently discounted from its standard $329 price, and now goes for just $299 (save you $30). You can order it online now, either directly from Pocketalk’s official shopping pageAlternatively, you can also Get it from amazonif you prefer.

Pros and cons of a digital mailbox or virtual mailbox

During the worldwide COVID-19 pandemic, people are becoming more self-conscious about staying protected both from the SARS-CoV-2 virus and also from any other dangerous pathogens (such as any infectious agents such as bacteria and other germs, all of which are invisible to the human eye and can to multiply rapidly once captured). The main reason […]
Tekno

How do you choose the best slot machines?

Slot machines are one of the most played casino games on the internet. Slot machines are a great way to unwind when playing in an online casino, whether for fun, money, or both. With slot machines, there is no need for players to spend time training, learning new skills, or mastering any specific strategies. Everyone […]