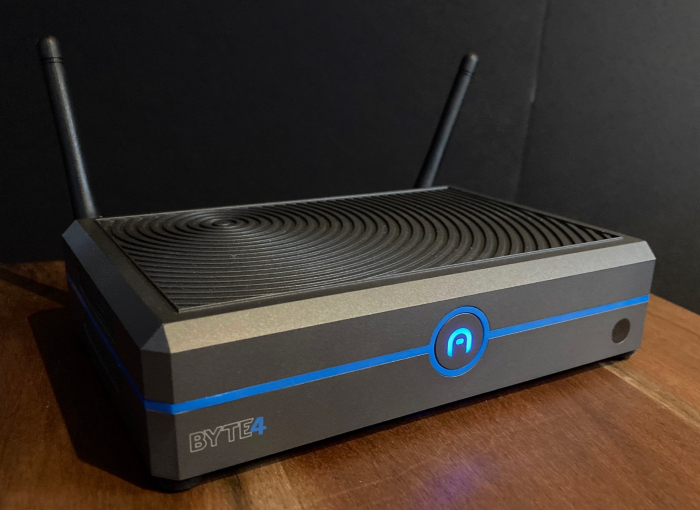 If you are someone who regularly needs to do office work while on the go, laptops will obviously be the most convenient solution for you to work while traveling, and this is of course due to their overall lighter weight and easy portability. However, while laptops are suitable for people who don’t want to carry around unnecessary peripherals, most laptops are quite restrictive when it comes to expanding their overall usability in order to eventually use them as more versatile workstations. Compared to laptops, portable mini desktops are much better alternatives for people who want more freedom to connect their laptops to various peripherals, including not just a mouse and keyboard, but more importantly, a single external display. Or more (which can help greatly in increasing one’s productivity), and maybe even a set of external speakers (which tend to be better than the ones that come built into most laptops). So, if you are looking for a device that is not only lighter, more compact, and more powerful than most laptops, but that also allows you to do just about any type of office and/or business work while at home as well as on the go, the Azulle Byte is 4 Pro is a great option that you can use.

Designed for next-level multitasking and powerful performance, this fanless mini portable desktop computer is great for doing any kind of computer work, this includes home use as well as office use/commercial use. Moreover, Byte4 Pro is also great for participating in video conferencing, digital signage, broadcasting, and more.

Now, let’s take a more detailed look at Azulle Byte 4 Pro and check out all that this versatile and portable fanless mini desktop ultimately has to offer to its users.

Starting with its size, the Azulle Byte 4 Pro is designed to be more compact and lighter than most laptops, measuring just 5.1 inches long, 3.8 inches wide and just 1.5 inches tall, while also weighing just 36.64 ounces.

In fact, this small portable fanless desktop computer is so compact that it can fit comfortably in the palm of your hand, which means that its ultra-compact form makes it very easy to carry it with you at all times, ultimately making it a great portable work solution for doing office work in Anywhere, including at home, in the office, or even on the go.

On top of its portability, we would also like to note that the Azulle Byte 4 Pro can also be configured/installed as a durable and versatile work solution, as the device itself also features VESA-Mounting compatibility, as its chassis comes integrated with a VESA-compliant mounting plate, which can be found It is directly on the underside of it. This ultimately allows users to mount the unit to the wall using a VESA-sized mount if they choose to do so.

In terms of its design, this fanless mini laptop desktop has a fairly minimalist and professional-looking design throughout its flat matte black chassis, which is then very discretely distinguished by a smooth glossy blue horizontal line running through the middle of the part. The body of the device and its surroundings.

The color of the same soft light blue horizontal line perfectly matches the color of the company’s official Azulle logo, which can be found in the middle of the front side of the device.

Then, when it comes to its construction, the Byte 4 Pro comes packed with a nice and sturdy exterior that is primarily made of a mix of high-quality plastic materials, giving the entire device a fairly sturdy build overall, which helps greatly in portability of course.

Now, on a certain side note, it is important to note that since this is actually a small portable fanless desktop computer, it does not come with a built-in fan cooling system (ie indoor), as only hot air is filled in. Built-in mesh in the middle of the left side of the device.

However, users can eventually go for the higher-end model of the Byte 4 Pro, which will then allow them to have a small portable desktop computer with a proprietary active cooler that has been strategically designed for use in harsh environments, ultimately giving them the system is the ability to Withstand temperatures up to 130 degrees Fahrenheit and achieve next-level performance.

This is only necessary for people looking to run high-level computer tasks, such as opening large amounts of Word, Excel, and PDF documents with multiple browser tabs open at the same time, or something similar.

Moving on to the Azulle Byte 4 Pro system specifications. Starting with the CPU (i.e. the processor), as mentioned earlier, this fanless mini laptop desktop is powered by the Intel Gemini Lake 41 Series processor, which also comes integrated with the Intel UHD Graphics 600 GPU which is used as its dedicated GPU. .

Not only that, but the Azulle Byte 4 Pro also comes with 4GB of DDR4 SDRAM (which can be expanded up to 8GB of RAM), along with an eMMC (Embedded Multimedia Card) as a dedicated hard drive providing users with a total of 64 GB of storage by default. Note, however, that the computer’s storage can be expanded further (up to 512GB) via the dedicated Micro SD card slot.

Last but not least, the Azulle Byte 4 Pro also comes with Windows 10 Pro preinstalled as a custom operating system (as was the case in our review unit), but customers can also choose to preinstall it instead with Windows Server IoT 2019, Linux, or Chrome if they prefer one of these options.

In terms of system BIOS, the Fanless Mini Desktop PC can install Wake On LAN BIOS, PXE BIOS or Auto Power ON BIOS, which is ultimately up to each user’s personal choice.

Finally, we’ll take a look at all the different connectivity options this fanless portable mini desktop has to offer. 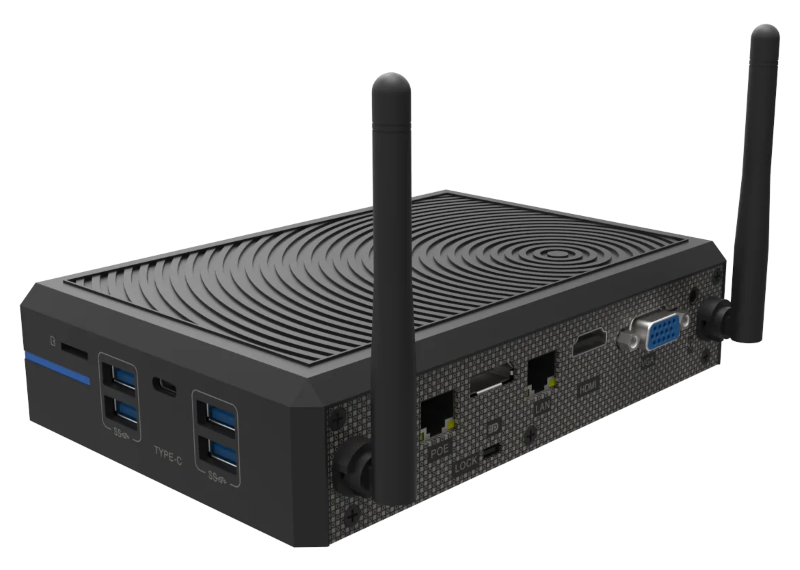 Starting at the back of the device, and going from left to right, we first have its 12V/2.0A power input port, which is followed by the Ethernet port as the first of its Dual Gigabit LAN Ethernet ports, which can optionally be used as a POE (Power Over Internet) port for its power supply. (Instead of using its own 12V power outlet). On this note, consider paying Azulle Official Video Guide on How to Install POE on Byte 4 Pro.

Moving to the left, we have the DisplayPort 1.2 output, and below it is also a Kensington lock (to securely lock the unit to a Kensington security cable), which then follows the LAN port as the second of the Dual Gigabit LAN Ethernet ports, and then the HDMI Output port that allows users to connect the Byte4 Pro to any A monitor with 4K video output at 60fps, a VGA output port, and finally, a 3.5mm audio jack output port that allows users to connect the Azulle Byte 4 Pro to any 3.5mm speaker system for external audio whenever they want.

All the video output options in this portable mini PC make the Byte4 Pro great for video conferencing, digital signage, broadcasting, and more.

Finally, on the right side of the device, we also have a Micro SD card slot that allows users to increase the overall storage capacity of the system (supports Micro SD cards up to 512GB, as mentioned earlier), as well as one (x1) USB-C port and four (x4) ports Additional USB 3.0, all 5 USB ports can be used to connect any type of external storage system, including flash drives, external hard drives/external solid state drives, etc.

Best of all, it’s built into the back of the Azulle Byte 4 Pro, and there’s also a set of two Wi-Fi antennas (x2), making the system capable of providing users with dual-band 802.11 AC Wi-Fi.

Not only that, but the system also features Bluetooth 4.0 connectivity, allowing users to connect the system to any Bluetooth enabled device(s).

Inside each package, users will find: their own Byte4 Pro, along with a dedicated 12V/2A power adapter, some that include a heat tape (users can install it inside the system to further improve overall cooling), plus a device quick guide.

Overall, this fanless portable mini desktop computer can be used as a versatile solution for working in the home office, but it can also be used to play less demanding video games, or in the end, you can even run it as a home theater system in order to watch your favorite content (movies, series TV, etc) simply by connecting it to an external monitor, such as a smart TV, flat screen, 4K monitor, etc.

If you are interested in purchasing it, know that a file Azulle Byte 4 Pro Standard Model (without any accessories) At only $299.99. However, you also have the option to be equipped with one of several different optional accessories, including POE (costs $324.99), with Active Cooling Unit (costs $324.99), with Logitech Keyboard (costs $323.49) or with Logitech Keyboard and Camera (costs $378.49), or either with Lynk Remote ($334.99) or with Lynk Remote and Camera ($389.99). You can order it online now directly from Azulle’s official shopping pageAlternatively, you can alternatively Get it from amazonif you prefer.

Whether you are a beginner in the world of online gambling or a seasoned player looking to upgrade your skills, you will be able to find many great games from Microgaming. These games offer a wide range of features and benefits, including the ability to win huge jackpots, high-quality visuals, and high frequency rates. In […]
Tekno

Brain training (or mental training) can be an essential part of maintaining a healthy mental state, as doing so on a regular basis can greatly help improve cognitive functions such as memory recall, problem solving, focus and attention to detail. Basically, brain training activities work in a similar way but are ultimately better than aerobic […]